Empire SYX is the latest arrival in the Axe series of Paintball Guns. It is a redesigned model with new features and specs for enhanced performance and consistency on the field. The gun seamlessly maintains a balance between Durability and Technology.

The SYX is the 6th generation marker that features a 14-inch micro-honed 2-piece aluminum barrel with anti-chop laser eyes and standard O-rings. Moreover, the streamlined design gives you total control over the gun. 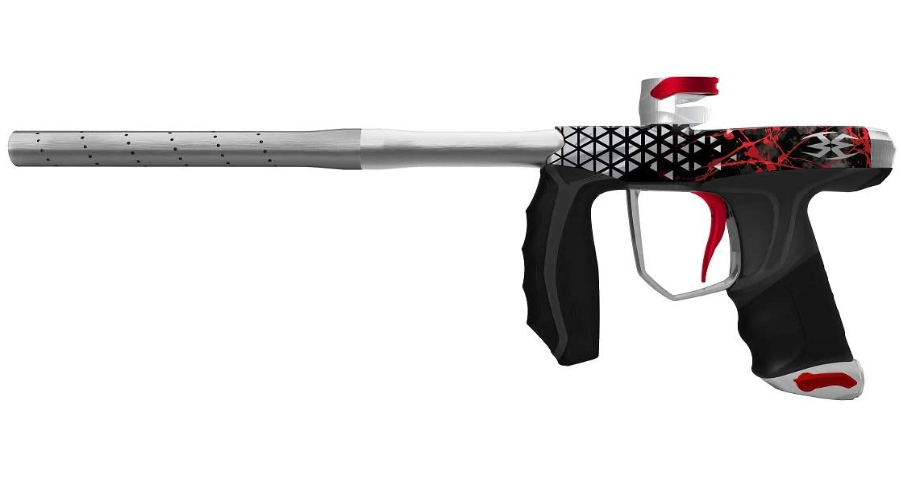 Without a doubt, Spyder SYX is a high-end paintball marker because it is compact, fast, and reliable to use in all kinds of harsh weather conditions. The gun also features a multi-function Redline OLED board with 2-button navigation.

The improved regulator also allows this marker to operate at a consistent velocity. Also, it is simple to disassemble and remove the regulator. You just need to remove the two screws on the bottom to replace the regulator.

Empire SYX features a graceful yet durable design. It is made from robust materials and is strong enough to perform in all kinds of indoor and outdoor environments. Besides, the soft rubber grips are well-wrapped around the frame.

The extended soft grips allow you to handle and operate it with quite an ease. Surprisingly, SYX is among the most lightweight markers in the market. Due to lightness, it is easy to carry it around during long gaming sessions.

Empire SYX is an electronic marker that is considered a perfect option for advanced paintball players. The gun is compatible with .68 caliber paintballs and operates with both CO2 and High-Pressure Air.

The gun is equipped with a 2-piece aluminum barrel system with a 7.5-inch control bore for enhanced accuracy on the battlefield. However, you can upgrade the barrel to experience improved accuracy at different distances.

Unlike previous versions, Empire SYX features an extended Bolt System that helps in shooting consistency and reduces the sound. Moreover, the new bolt system also lowers the operating pressure from 200 PSI to 165 PSI.

Empire SYX is outfitted with a Redline OLED Board with 2-button navigation system.. This feature allows you to control and monitor the performance of your gun. Also, the OLED makes it easier to maintain and reduces the chances of malfunctioning.

Empire SYX comes out with a soft adjustable trigger incorporated in a large trigger frame. However, the trigger quality is as same as all the other Axes models have. It is not the lightest one but somehow allows you to experience a smooth shooting mechanism.

Empire SYX is a highly customizable marker. Indeed, you can upgrade its parts according to your playing style. You can add a new trigger with a clamping feed neck and barrel to experience enhanced performance on the playing field.

With Empire SYX, maintenance is not an issue at all. It is easy to clean and maintain because it has a tool-less bolt removal and a battery door. Moreover, the regulator on the SYX is easily removed by using Allen Wrench.

The Good
The Bad
Conclusion
Empire SYX is the most refined and improved paintball gun ever launched by Empire. It is fast, reliable and easy to maintain. The gun offers redesigned Bolt System and Regulator that boosts your performance on the playing field. Indeed, SYX is a valuable option for Pro-players.